April Fool’s Day was three weeks ago. So, why am I just writing about it now, you wonder? Because, reader, it has taken this long for Bryan to acknowledge the prank I played on him this year.

Bryan and I love April Fool’s Day. Or, at least I do, and I love playing pranks on Bryan. In years past, I’ve surprised him by TP-ing his bikes, replacing our toilet paper holder with a voice-recordable one and hiding fake feces in his clothes.

This year, I devised a new kind of prank: I coordinated a number of people to text him throughout the day. First, I turned to Facebook for help:

I also posted a similar note in my office’s kitchen asking my coworkers to participate. Within minutes, I got this text from Bryan: 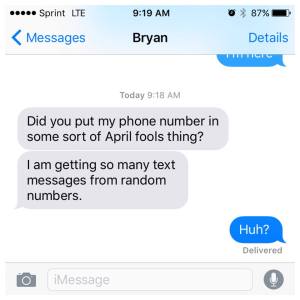 I denied his suspicions craftily, as you can see. All day, people messaged me, texted me or stopped by my office to show me the texts they sent to Bryan. Even Bryan’s mom sent a message. It was wonderful! Cat photos, funny jokes, pictures of Dolly Parton, and some very disturbing photo series about murder that started with “I know what you did,” which I honestly could have done without.

By the time I got home that evening, I knew Bryan knew the texts were a prank from me. I braced myself for a retaliatory prank upon entering the house but found nothing obvious. In fact, when Bryan greeted me, he didn’t acknowledge it at all! I tried to prod him a bit. “So, did you get a lot of fun texts today?”

Just then, his phone buzzed with another text.

And that was that. Not another word, not a single retaliatory prank. Finally, last weekend, Bryan’s mom asked him about it while she was in town visiting, and I finally got some answers.

Bryan showed us all of the texts – marvelous! hilarious! – and, after a few minutes, he finally admitted the truth. “It was pretty funny,” he said. “You really got me.”

Ahhhh. Music to my ears.

“But you just wait until I get you back next year.”

Gasp! I hope it has nothing to do with those murder texts.