Two weeks ago, Bryan entered into a competition called “Beards and Brews” at our neighborhood Fountain Square Brewery. Bearded participants faced a panel of middle-aged judges and modeled their facial hair. Four winners were selected, awarded prizes for Longest Beard, Most Creatively Groomed, Thickest Beard and Best In Show.

Look at the joy on our faces.

His Fountain Square victory turned out to be a “regional” competition, so by winning, Bryan qualified to move on to the city-wide event to compete against victors from other breweries around Indianapolis.

Yes, this is a real thing, folks.

We arrived at the competition site in Noblesville on Saturday. Appointing myself as Bryan’s beard manager, I approved his beard styling, carried his beard oils and waxes and coached him on where to stand and who to mingle with at the event. He heeded my advice selectively.

Each brewery’s four winners lined up in front of the stage. Category by category, they were called up on stage to pose, answer questions and model their beards for the judges.

The Best In Show category was last, and I’ll be honest, I was nervous! But once I saw the three men Bryan was up against, I became more confident. I just knew he would be the champion!

And wouldn’t you know, after wowing the judges with his charisma, delighting them with his posing and tugging at their heart strings by telling a sweet story about yours truly (awww), he was named the Inaugural Beards and Brews Champion!

And he even made the Indy Star. 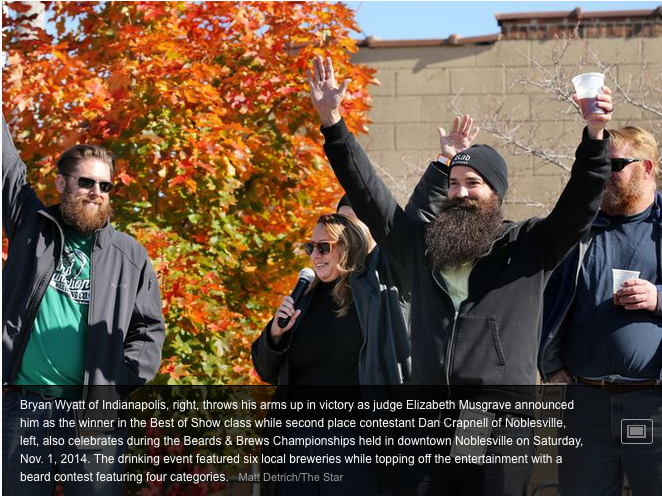 Guess that makes me the Beard Queen!