I arrived at Audrey’s apartment a little after 1PM. Her garage door was open, just like she said it would be, so I walked past her car and knocked on the door.

“Ok!” I heard her yell from inside. She opened the door and greeted me, beaming.

Audrey looked a little older than I remembered, and her hair had grown long, past her shoulders. It was more blonde than the bright red I was picturing. She wore a leopard-print cardigan and what she would tell me later was brand new Boots foundation.

“Hi!” I exclaimed, genuinely excited to see her. I turned around and waved goodbye to Bryan, Brad and Megan, who dropped me off to drive around Denver and explore. The day had gotten a little off schedule, so Audrey and I scrapped our plan to go to lunch together and decided to catch up in her apartment instead.

“I had the girl come and help me set out these snacks for you this morning,” Audrey said about her cleaning lady as I kicked off my shoes and followed her into the dining room. The girl must have been here at 6AM, I thought to myself, looking at the snacks. Crackers and two kinds of cheese slices were neatly arranged on a plate, the cheese sweaty and melty from sitting out in the hot apartment for hours.

Around the table, Audrey had laid placemats and topped them with china and napkins. Empty glasses, hand painted with scenes of Miami, sat on the table. Next to one of the placemats was a bottle of rum sitting neatly atop a folded paper towel.

“Take a picture of the table,” she directed. “And send it to me so I can remember our day.” 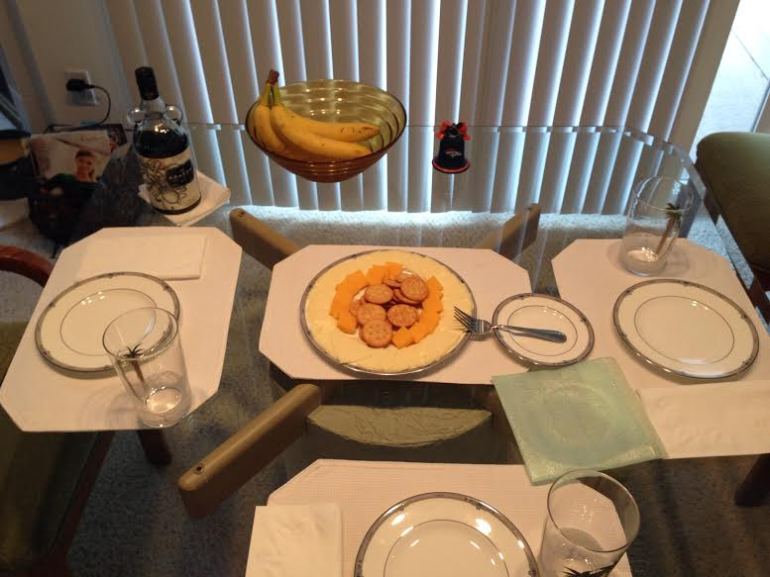 “I thought you could sit there,” Audrey said when I was done, gesturing toward the seat by the rum. “Wouldn’t you like to sit there and drink a cocktail and look at yourself in the mirror on the wall?”

“Sure!” I agreed. It was clear that she had thought through every detail of this day, and I wasn’t about to change her plans. Honestly, it was adorable.

I sat at the table and she procured a two-liter of soda from the refrigerator, along with a shot glass. “Pour yourself a shot of rum,” she directed, “and then top it with this soda. Or would you rather have beer?”

“I’ll just have the drop that’s left in the shot glass when you’re done with it. Alcohol doesn’t agree with me much.” She took the shot glass from me and tipped it upside down over her cup, letting one miniscule drop of rum fall in. I filled the rest of her glass with soda and she mixed her drink with a spoon. “Sorry I don’t have one of those shakers,” she said.

I took a sip of my drink and tried to scrape some melted cheese off of the plate, to be polite. Audrey and I sat at the dining table for an hour, catching up on our lives, our families and current events.

She explained that she had CNN on the TV so I could hear how fast the newscasters talked, and didn’t I agree that they’re impossible to understand? And she expressed her concern that two of her grandsons are dating “ethnic” girls, one “really fat black girl from an island somewhere” and one “Chinese girl from Taiwan who you’re not supposed to call Chinese, because she’s Taiwanish or something, but isn’t it all the same?”

Eventually, we went into the bathroom so she could show me her new Boots foundation, which she insisted I apply on my face, despite the fact that the makeup was at least two shades darker than my skin. We peeked into her bedroom and she pointed to the spot on the ceiling from where she can hear her neighbors “cohabitating” at night. Then, we stopped by her computer desk so she could show me these “damn messages that keep coming up” on her Gmail account.

“These messages. Even when I delete them they come back!” she lamented.

I explained that the damn messages were called drafts, emails that she started writing but never actually sent. We went through each draft, none of which had subject lines, and deleted them one by one. I reminded her how to add new contacts into her account, and we took turns reading aloud an email she received from her granddaughter.

Eventually, nearly two hours after I had arrived, my friends came back to pick me up from Audrey’s apartment. They were nice enough to come inside and introduce themselves, and we all stood around the kitchen counter making small talk while Audrey wrapped the remaining cheese and crackers in a single sheet of paper towel for us to eat on the drive back to Boulder. We politely declined bananas.

She led us to the garage door, explaining to Brad that the key to keeping a clean car was never taking it out of the garage. Bryan, Brad and Megan said goodbye and thank you and walked into the driveway to get into Megan’s car. I turned to hug Audrey goodbye.

“I’ve never been to Indianapolis before,” she said. “I’ll have to fly out there and visit you next. If the weather ever gets warmer, of course.”

We smiled at each other, her bony hands resting on my arms. “I was thinking about you coming to visit me,” she started. “I’m happy you remembered me after all these years. I’m glad we’re still friends.”

She stopped for a second, thinking, and then said, “Why do you think we are friends? I’m so old. What is it that you see in me?”

I smiled. “Sometimes you meet someone and you have a connection with them. We’re just connected to each other somehow. I think we’re just meant to be friends.”

3 thoughts on “Reuniting with Audrey [Part 2]”