Every morning, I have the same routine:

This morning, around step #6, I entered the living room to find the cat suspiciously sitting on the trunk/coffee table with my makeup. 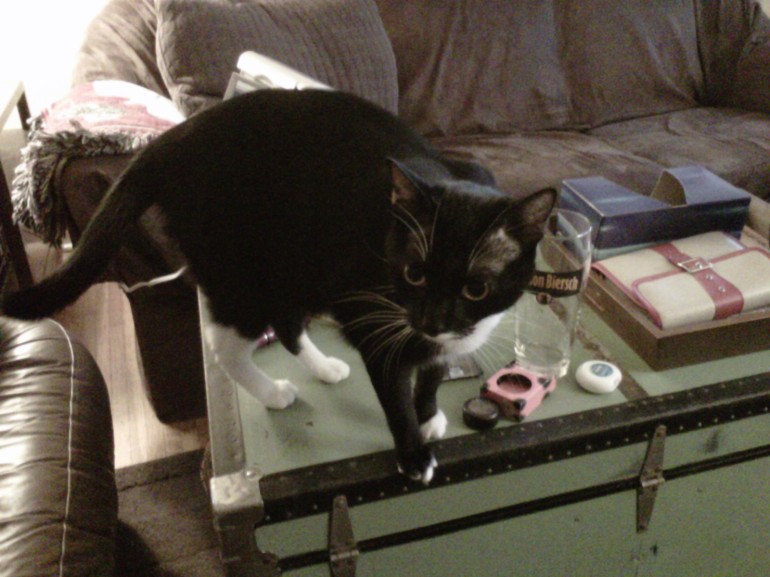 Upon further inspection, I figured out what he was up to.

For some reason, any time there is a plate of food left somewhere, (I realize that sounds like my house is trashy), and Batman sees it, he will spend a few minutes circling all around the plate, pawing at the ground around it. He’ll stand on one side of the plate, reach across it to the opposite side, and paw at the ground. Then, he’ll move to another side, reach across to the opposite side, and paw again. He does this over and over until he’s pawed a circle around the dish a few times.

I Googled this the other day and read that, supposedly, it’s some weird thing that cats do to mark their property. Their paws leave behind a scent or something. I don’t really understand that, since he never actually eats anything on the plate, but I guess he just likes to claim it.

At any rate, I realized that this is what he was doing, except it wasn’t around food, it was around my coffee. The only problem with this, though, was that my makeup was also surrounding my coffee. Open pots of concealer, five different shades of eyeshadow, loose false eyelashes, all strewn about the trunk.

Batman pawed to the opposite side of the coffee cup, his fuzzy little belly dipping into the mug. Great. As he turned to another side of the cup, he started pawing in my black eyeshadow. Before I could move it and wipe off his paw, he turned again, this time leaving black paw prints on the table. While I was trying to clean off the paw prints, he began pawing at the tissue on which my false lashes were organized. Not only did he manage to get some of the eyelashes stuck to his paw, but before I could react, he somehow scooted the whole tissue, eyelashes and all, into my coffee.

Finally, I picked him up and pulled him onto my lap, only to feel that he was completely wet. Great. Turns out, prior to ruining my coffee, he had jumped into the shower after I had gotten out. (He loves to sit in the bathtub and watch water drops slide down the shower curtain liner. Not sure why. Google didn’t say anything about that one.)

I set him on the ground, dumped out my coffee, cleaned off the trunk, changed my clothes, and finally, was on my way to work. Phew! 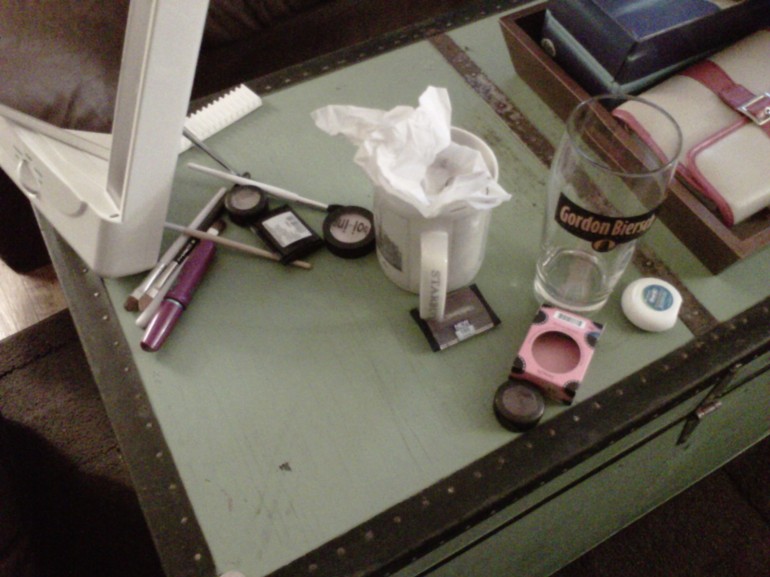 (If you look closely at the very corner of the trunk closest to the camera, you can see little black-eyeshadowed paw streaks!)

Good start to the day.