David and Erin Machemer got married on Saturday. It was one of the most fun weddings I’ve been to. There were a ton of people from high school there, and it was so fun to catch up with them! Naturally, the reception turned into something similar to our past high school dances.

Double dutch started at some point later in the night after a few drinks. In case you don’t know, double dutch consists of two people on each end of the dance floor, moving their arms like they’re swinging jump ropes. The “jumper” then has to dance while jumping between the “ropes”. Requires a lot of skill. 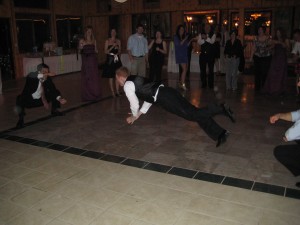