People frequently say my name wrong. Although I think it’s an easy name to pronounce, most of the time I’m called the wrong name at work, where I’m wearing a nametag that says “Jillian” in bold letters. Lately, I’ve been called: Julie Anne, Julian, JoAnn, Julia, Julie Anna, Jeralyn and even Jun Lin.

Coleman’s name gets messed up, too. Either people can’t read it, or they forget everything but the fact that it’s a unique name, and they come up with a different unique name of their own to call him. Examples of his name include: Corbin, Colon, Collin, Cameron, Colton, Corbett, Clinton and even Jackson.

But today’s name tops all of them. Coleman called the local pizza restaurant to order some dinner. He even spelled his first and last name, as has become a habit, so they would get it right. When he went to pick up the pizzas, he gave his name to the girl at the front, but they couldn’t find the pies. Why? Because the guy who took the order got his name wrong. 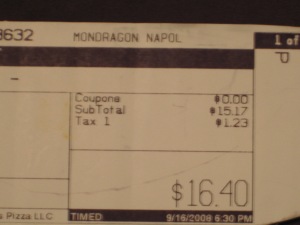 6 thoughts on “What did you just call me?”